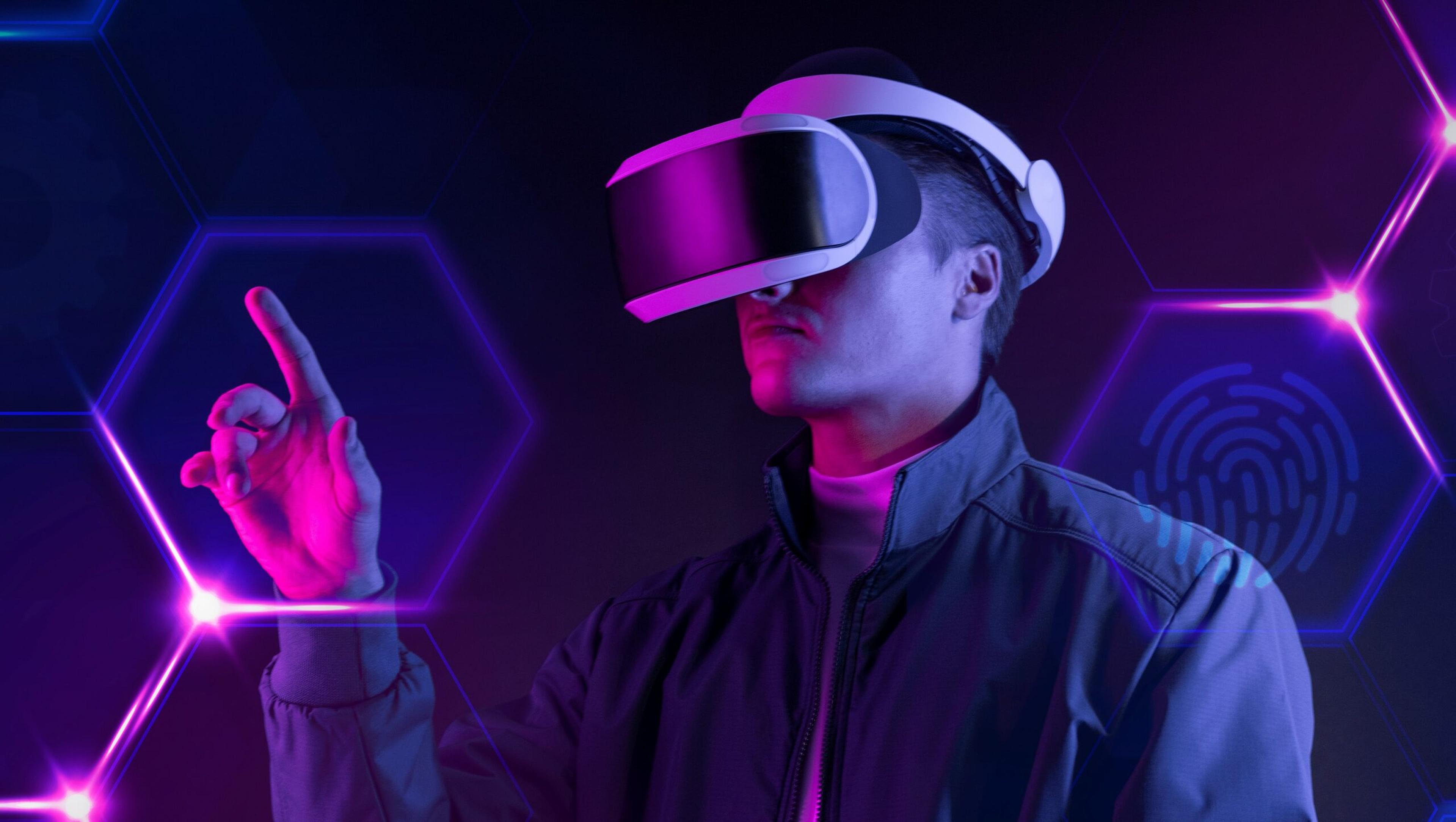 Into the Metaverse: How AR & VR are Revolutionising Gaming

Virtual reality, augmented reality, the metaverse. These are all words and phrases that you will have heard thrown around plenty of times in recent months, mainly due to Facebook’s October 2021 announcement that they are rebranding as Meta, and alongside this investing billions of dollars into developing ‘the metaverse’. But what do we actually mean when we’re talking about AR, VR and the metaverse?

Let’s start by defining the aspect that is more familiar to most people, virtual reality. Virtual Reality is defined as a computer-generated simulation of a 3D environment that can be interreacted with in a realistic way via the use of equipment such as VR headsets or gloves fitted with sensors. VR has become very synonymous with gaming, with gaming being viewed as one of the key applications for VR technologies. Popular VR games that we have seen already include Beat Saber, Half Life: Alyx as well as others.

So, how does this differ from AR? AR or augmented reality can be described as a technology that superimposes computer-generated imagery into the user’s real-world view, creating a composite view of the environment around them, comprising of both real and virtual elements. So, the big difference between VR and AR is that VR is an entirely virtual world whereas augmented reality is a world where the virtual is interwoven with the real to create a new reality. Pokémon Go saw the concept of AR gaming brought to the masses in a fairly simple but very effective way, peaking at 233 million users in 2016, and still bringing plenty of revenue in a way beyond its initial launch, surpassing $1 Billion in revenue for the first time in 2020.

This brings us to the metaverse. The metaverse is viewed by some as the real future of not only gaming, but social and professional interactions for everyone the world over, and is viewed by others as nothing more than a corporate buzzword that only serves to perpetuate the importance of brands such as Meta and others who will control the metaverse. The true definition of the metaverse (a term that first appeared in Neal Stephenson’s novel Snow Crash in 1992), is a network of virtual 3D worlds focussed on social connection. So, in short, the metaverse utilises AR and VR technologies to create a virtual world for people to interact with each other in.

Whilst the concepts of VR and AR have been present in gaming for over 5 years now, the full extent of the impact that they will have on the gaming industry is still being speculated about. Many feel that the VR and AR gaming will be the natural progression for gaming, and that perhaps in many years to come they will be the leading forms of gaming, with other PC and console games falling to the wayside. Others are less sure of this, and instead think that VR and AR will simply be an addition to people’s gaming consumption. Either way there is certainly an ever-growing market surround VR and AR gaming.

According to the International Data Corporation, the AR and VR market generated $12 Billion in 2020, and the market is forecasted to surpass $72 Billion by 2024. Other companies are forecasting similar growth within the market in coming years, with some companies such as Technavio even predicting that the market will grow exponentially by over $160 Billion by 2025. One thing is for sure, a lot of gaming companies are investing heavily into developing AR and VR technologies, and we can certainly expect a lot more game releases, equipment and other developments in the AR and VR space in the coming years.

There are a few things that could impact and hinder the growth and development of AR and VR in gaming. One obvious drawback for developers is that there are fewer gamers who own VR headset owners than there are gamers who have other consoles or play on PC. To highlight this, we can compare the releases of the Oculus Quest 2, the Xbox Series X and the PlayStation 5, all released in October or November 2020. It was reported in late 2021 that the Oculus Quest 2 had sold 10 million units, whilst the Xbox Series X reportedly sold 12 million units in a similar time, and the PS5 sold over 17 million units in 2021.

When you consider that it is easier for developers to create a game that can be put out on both Xbox and PlayStation consoles than it is to put out a game that is made for VR consoles, you can see why might be more tempting to stay clear of VR games. Other things to consider would be the costs involved in developing VR and AR orientated games, platforms like Unity have limited packs available to aid in the development process of VR and AR games, and these packs are often at a higher price than packs that aid development of other games.

These reasons may well mean that it takes longer for smaller indie developers to take to AR and VR game development, but certainly will not stop the big boys from diving into the World of AR and VR video game development, with companies like EA and Sony making major investments into AR and VR technologies in recent years.

Although the concepts of AR and VR have been around for a while now, we are still very much at the beginning of a long journey when it comes to AR & VR and the gaming industry. As more and more companies and games step into the world of AR and VR, more and more players will do so as well, and with the rapid progression of the AR & VR video game market only looking like accelerating further in the coming years, we can certainly predict that AR & VR will solidify themselves as the future of gaming.

Will AR & VR gaming ever completely overtake good old consoles PC gaming and consoles from Xbox and PlayStation? At this point it’s hard to tell, but it certainly feels like we are some way from that ever being a reality. In any case, the AR & VR video game market certainly is an exciting one, and we are surely set to see more AR smash-hit’s akin to Pokémon Go in the near future. Whatever happens next in the World of augmented and virtual reality, we can be sure that more and more ground-breaking developments will be made in the years to come.

Want to hear how The Game Marketer can help market your AR or VR game? Give us a message and let’s have a chat!